Anna Kournikova smiles as she prepares to reveal her latest indulgence 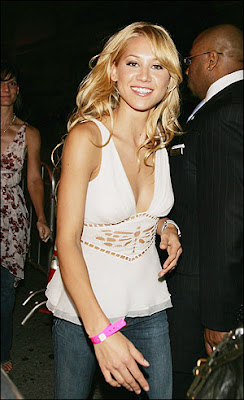 Meticulously slicing a juicy red apple while gripping a knife with her long, slender fingers, Anna Kournikova smiles as she prepares to reveal her latest indulgence. The sexiest athlete in the history of women's sports is discussing what it's like, at 25, to be retired -- well, that's not what she calls it, because she hasn't ruled out a comeback -- and now she's flashing those perfect white teeth and preparing to devour the fruit of her labor.

"I read like crazy," she says, becoming visibly excited. "Magazines, short stories, books -- especially when I'm on an airplane or the treadmill or the exercise bike. Lately I've been into summer chick-lit, lighthearted stuff. And I'm into all kinds of magazines, from Vogue to O to Good Housekeeping. Yesterday on the plane I was reading [a Good Housekeeping cover story] about Rachael Ray and her recipes. Hey, I'm home a lot now, and I want to start learning how to cook."

Good Housekeeping? Good Lord. This is ANNA KOURNIKOVA, she of the haute couture and the nude stalkers and the sassy bravado, the fall of Russian Communism brought to its conspicuous extreme. Now here she is, sitting in a hotel suite in suburban Sacramento, where in a few hours she'll play a World Team Tennis match, telling me about her woeful inability to co-mingle with celebrities ("I've been to like three Hollywood parties, and the last one was after the Teen Choice Awards last year, and everybody was under the age of 21") and her forays into a life of domesticity.

What happened to the impetuous girl whose "Anna-tude" inspired one of the Sports Illustrated stories I've most enjoyed writing? In 1998 I profiled Kournikova, and the interview ended with the young beauty throwing her head back while sitting in the passenger seat of a Mustang convertible, the California desert wind whipping her long, blonde hair across her tanned face as she commanded: "I have a lot of boyfriends -- I want you to write that. Every country I visit, I have a different boyfriend. And I kiss them all."

The answer, as I would come to learn during our hour-long conversation on Wednesday, is that she grew up. The Kournikova I met in the spring of 1998 was 16 and very much aware of her bursting-at-the-seams potential, both on and off the tennis court. She would ultimately deliver more as a celebrity than as a champion -- how many of you have already fired off e-mails reminding me that Kournikova never won a tournament on the WTA Tour (which is like noting that Mike Shanahan has never won a Super Bowl without John Elway)? -- but I am not hearing any of this garbage that she wasn't a legitimate player.

As I recalled during our conversation on Wednesday, the week after my Kournikova story ran, at what was then called the Lipton Tournament in Key Biscayne, Fla. (unofficially dubbed the "fifth major" at the time), Anna became the first player in history to defeat three top 10 players in a single event ...

"On grass, with three torn ligaments in my right hand," Kournikova interjected. "I fell at three-all in the third set and ripped up my hand and finished the match. I was only the second player to beat her on grass in the '90s."

The injury forced Kournikova, who had been a Wimbledon semifinalist at the age of 15, to withdraw from that tournament, and a series of other injuries (foot, back, thumb) kept her from possibly approaching the heights reached by contemporaries Martina Hingis and Venus and Serena Williams. By 2003 Kournikova had been diagnosed with chronic spinal lumbar dysfunction, "where your S1 joints always move and one hip is higher than the other," she says.
Diposting oleh Unknown di 03.23