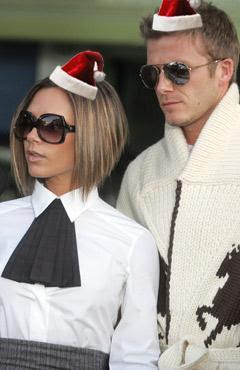 If you believed last year's Tesco ads, Posh Spice does her own Christmas grocery shopping. Hmmmm. In 2004, David and Victoria hired a £1000-a-day butler to help them unwrap their presents. Well, it is very tiring tearing all that wrapping paper and the sellotape can be a bit finickity to get off. This year, the former Spice Girl and husband David were reported to have been arguing over where to spend the holidays. David wanted to head to the UK and see family, while Posh wanted to spend it in LA as she felt it would send the right message to her American fans. It looks like David wears the trousers (most of the time!) in this relationship, as the family made their way back to the UK on the 19th December.
Diposting oleh Unknown di 02.33